Excerpt from ‘Silvana the Greening’ by Belinda Mellor:

“The woods,” he said. “Would you move away from them?”

She regarded him sternly. “You think too much of the woods, when you should be listening to the litigations in the courtroom, inquiring after the latest discussions of the Assembly, studying in the library. Maybe we should be nearer the centre of Deepvale. You might do such things then, as you ought. Yes, I think that would be best.”

Belinda: Teresa and I have both recently been through the great ‘house move’ which is, of course, a chance to find and consider everything you own – what to keep, what to lose – identifying everything that is precious and what is important or necessary, plus figuring out what will work in the new circumstances. How has that experience been for you?

Teresa: it was exhausting, Belinda! It all happened very fast, and trying to get our last bits out amid pouring rain is an especially vivid memory. We’ve moved to a building plot on family land where I lived as a child, until my parents divorced. The land (including my mum’s little wood) was formerly a tin mine, which inspired the setting for my novel ‘The Time Crystals’, due out later this year.

Belinda: It rained here on our moving day too. And the very next day a weather bomb came through and blew down half of the fence! Not only that, we had lots of stuff in the front garden as we were struggling for space indoors. Speaking of which, it’s been quite difficult as we’ve drastically downsized, but it has also been quite liberating as we had collected far too much stuff over the past ten years simply because we had the room to do so. The hardest part is parting with things I actually like that are simply too big. The worst is the fact that we donated two really snuggly settees and the one we kept isn’t that comfortable – but it fits and it unfolds into a spare bed. On the plus size, as we’ve cut back on how many glasses, plates, etc., we can keep, we’ve parted with the ordinary ones and are actually using the nice ones, rather than just keeping them for ‘best’.

Teresa: Downsizing was a big thing for us, too. I’d call myself a conflicted hoarder! I hate waste and the throwaway society, but I love a simple, streamlined look. Overall, I found the need to be ruthless refreshing. It’s easy to amass so many special things that you no longer know what you have or where to find it. For me, it’s been important to remember that cherishing a person doesn’t mean you have to hang onto every single thing connected to them.

Belinda: That’s a very good point, Teresa. Memories are so much more important than things.

Excerpt from ‘Silvana the Greening’ by Belinda Mellor:

“Shall we build a new hold-house?”

Her question took him by surprise.

“Anywhere. I don’t think I can go on living here.”

“But.…” Be careful, he warned himself. “The holders of Deepvale have always lived here. We belong here.” It was a statement. He thought it wiser to make a statement than to express his feelings, which at that moment bordered on panic.

“That is of little matter,” she countered. “This house is not as old as the holding. There was a house on this site before this one was built, a house like this could be built on another site. What do buildings matter?”

As well as downsizing, and even though we are 11,000 miles apart, there are some other similarities between our two moves, aren’t there? For one thing, neither of us moved that far. It’s just over a half-hour’s drive to the valley and I’ve been back to visit friends several times already.

Teresa: You’re right, we’re only a few miles away from our old house, too. We were there for fourteen years, so it was a wrench, but we’ve been planning this move since 2011, and it felt right to move on. I miss the little things, like chats with my lovely next-door neighbour and the delicious free-range eggs we used to buy from a local young entrepreneur.

Belinda: Ah eggs! We had lots of chooks at our old house. I really miss having my own eggs. We’ve become suburbanites, and the town water is horrible compared to the lovely bore water we have enjoyed up until now. And the stars – I don’t have that huge empty expanse of night sky anymore – unless I walk down to the estuary (which, to be fair, is only two minutes away). I admit we have better sunsets here; must be the coast. There are lovely walks and I am enjoying being able to get to the shops, shows and galleries more easily. Mostly though it’s convenient for my family in terms of work and college and that has made a huge difference.

Teresa: We’ve done more or less the opposite to you, moving from a busy village to a quiet location on the edge of a wood! I love the lack of noisy traffic in the morning, replaced by the sound of wood pigeons cooing. A lot of my family are here, dotted about, and it’s great to be closer to them.

The biggest frustration is trying to get our house-build off the ground (literally). It has been beset by delays and endless bureaucracy. With former mining land, nothing is straightforward—it’s something of a regeneration project, really. We’ve had to learn an awful lot very quickly, and the costs we never considered (mostly to do with terms and conditions) are frightening.

Belinda: It must be very exciting building your own home on such a special piece of land, Teresa. Do you think this is going to be your forever home?

Teresa: Oh yes, indeed. If we can coax this house out of the ground, after planning and dreaming about it for so long, we hope to stay put!

Excerpt from ‘The Time Crystals’:

Clara shuddered. She didn’t expect anyone to understand. Maybe to other people it would just mean moving house. But Clara felt passionate about her land. The wood was a living being to her, and she loved it as much as any person. Sometimes more so.

Belinda: I’m a bit envious. We probably have another move ahead of us. In fact we are thinking we’ll only be here about three years, then hopefully back to being more rural – but staying on the coast.

Speaking of the coast, that’s what I always think of when I think of Cornwall, but that’s because we always went to coastal villages when I was a child on holidays. How near to the coast are you? 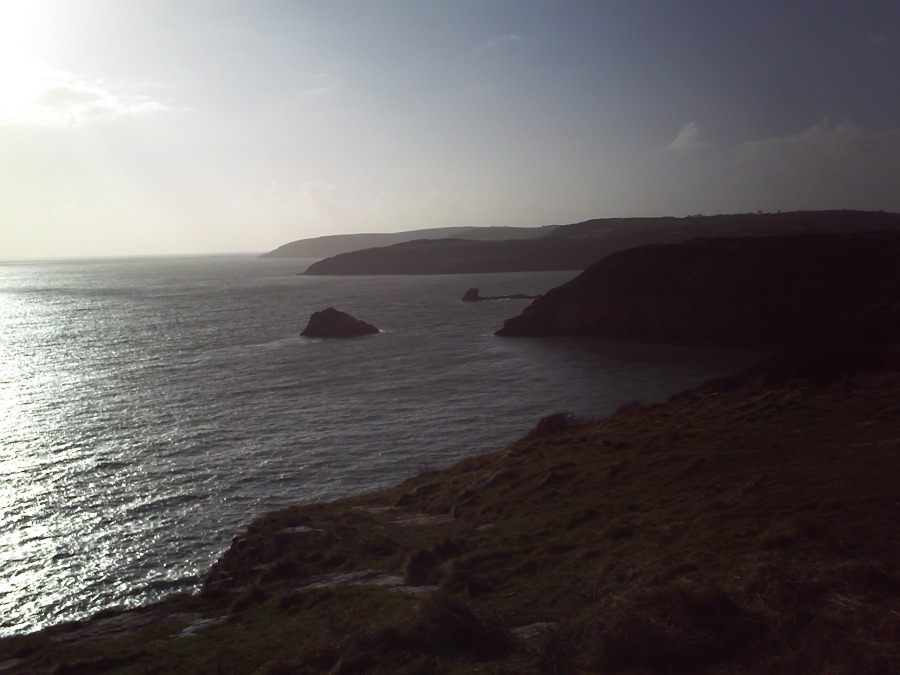 Teresa: We’re just two miles away, Belinda, but have only been once or twice since we got here! At the moment, we spend our spare time helping to restore Mum’s wildlife pond, which is hard work but a great joy. I miss my garden, but I brought plants in pots and lots of cuttings. I was pleased I managed to bring my wormery, as I’ve grown quite fond of the little critters. They’re busy making nutritious vermiculture for my future garden.

Belinda: I also had to leave most of my garden behind, but I brought some pots, including a small lemon tree that I’m hoping will enjoy the slightly milder winters where we are now, as we’re down at sea level. And even though we downsized, I made having a dedicated writing space a priority as I didn’t have anywhere in the old house – which was a big mistake. How are you managing?

Teresa: Haha, I do miss my old study. Things were quite tricky here at first, with both of us needing the same spaces. In the end we rigged up a tiny separate caravan as my office.

Belinda: That sounds nice. Looking back, what or when was your ‘big’ feeling moment, if you had one? For me it was when the old house sold, I think because it happened so fast and I really wasn’t expecting it to go so soon (24 hours after going on the market is soon!) There was a moment of panic: what on earth have we done? And then, about two weeks before we moved I drove around the new neighbourhood (for the umpteenth time) and a wave of certainty came over me that we had made the right decision, that was a special moment.

Teresa: I’m so glad you feel that way. We moved here just before Christmas, which was a poignant contrast with the previous Christmas, when I’d recently lost my beloved Dad and stepmum (both died of cancer within six months of each other). It felt right to move closer to my mum, back where I lived as a child. My dad and stepmum knew how much it meant to me, and would have been thrilled we’re finally doing the thing we’ve planned for so long.

Belinda: It seems like we’ve both done the right thing for where we are in our lives – which makes the trauma of moving easier, doesn’t it? But moving isn’t just about people! Something else we’ve got in common is our love of animals and we both have pets that had to cope with a move. We brought an aviary full of budgies – including babies – a bearded dragon, two cats, and two dogs. I have to confess the dogs, Faith and Aria, share our bedroom. They seem happy enough and have adapted to the much smaller garden and longer walks on the lead. They really enjoy going to the dog beach and it’s great to see Aria going full tilt on the sand and into the shallows. I’m pretty sure she can still get up to full race speed.

Teresa: I’ll bet! As for us, our greyhound Jinty is pretty laid-back about it, although she doesn’t like the building noises (my sister’s plot next door is a stage ahead of us). As for Lucy the cockatiel (the ‘feathered fiend’ we inherited from my stepmum), we thought she’d adapted really well, but then we had a terrible scare when she flew off during one of those horrible times when everything goes wrong at once. For two heart-broken days we looked everywhere, advertised, contacted local radio – then, thanks to Facebook groups and the kindness of both friends and strangers, we were reunited with her. I’ll never forget the feeling of getting her back safe and sound and my gratitude to everyone who helped find her.